In the wee hours of Saturday morning, one of the security guards in Moi University raped a first year female student. Those privy to the incident say that the student and a male companion were cornered by the guards who demanded a bribe after the female student was caught in the male section past stipulated hours.

Fifteen guards on duty on Friday night were rounded up as investigations into the unfortunate incident were launched. One of the guards is said to have walked off with the female student and forced her to have sex with him so that he does not report her to security office.

According to the University’s rules, a student is not supposed to be in the opposite gender’s hostels from 10:00pm to 10:00am. Those found culpable are sometimes forced to bribe guards to avoid being reported to security.

The institution’s Dean of Students Dr. Ayieko confirmed the incident in an internal memo and said the case had been filed at the university security office and at Kesses Police station. 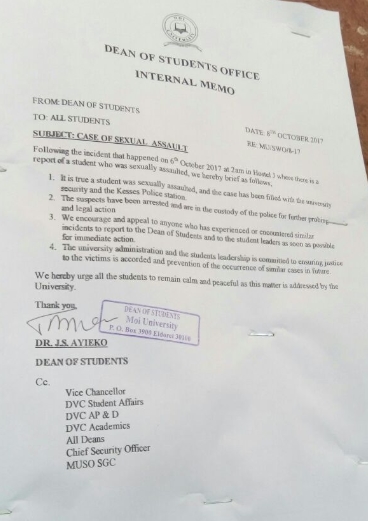 He also appealed to any students who encountered similar incidents to report to his office or the student leaders for immediate action.

Dr. Ayieko noted that relevant authorities were handling the incident with the seriousness it deserves and appealed for calm from students. Earlier, the student leadership had threatened to paralyse operations in the institution until the perpetrator was brought to book.

You can also read  Campus Vibe tour heads to Moi University Main Campus with a reward of ksh. 5000

According to Eldoret South OCPD Abduba Waqo, the suspected was arrested and is set to appear in court today.